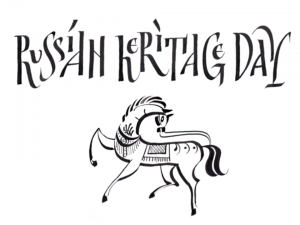 In November 2017, a Russian Heritage Day was held at the Cambridge Russian School. In planning this event, we set out to invite non-Russian residents of Cambridge and the area – in order to introduce them to Russian culture, language and traditions, and encourage friendship and mutual understanding.

This event has proved useful for our young students too – as they were able to see that not only their own parents are keen on things Russian, but many other people of different nationalities, ages and walks of life have genuine curiosity and interest in Russian language and culture. Especially for this Day, our teachers and parents (Svetlana Boutwood, Lyudmila Sikhosana and Alexey Komarov) had prepared interactive and fun lessons in the areas of their expertise – Russian folk songs and instruments, folk dance and a master class in applied art. Teachers Anna Nerukh and Tanya Yurasova ran taster sessions of the Russian language for beginners.

Simultaneously throughout the day, there was a programme of talks on various topics related to Russia. Macrae Morse, who used to work for a satellite company, talked about Soviet and Russian achievements in space exploration. Tanya Yurasova, a professional Cambridge tour guide, prepared a unique talk on “Russian Cambridge”, about our compatriots who had studied or worked in Cambridge (such as Vladimir Nabokov, Peter Kapitsa, et al.), as well as British graduates of Cambridge University who had been interested in Russia and had contributed, in one way or another, to mutual understanding between the two peoples. Marina Burrell, a lecturer in Russian language and culture, presented the topic “Myths and stereotypes of life in the Soviet Union: a view from the West”. Marina is an expert on the Soviet era, and brought along many exciting exhibits from her extended collection of Soviet artefacts. Senior Lecturer at Anglia Ruskin University Sean Lang talked about how the October Revolution was met in Cambridge and how the local press covered the events of the time.

The talks were given in English and were an enormous success, attracting crowds of people. Equally popular was the lunch break, when the guests were entertained by an amateur folk dance ensemble “Kalinka” who had come all the way from Northampton and demonstrated a number of colourful Russian dances and folk games. At the College Students Centre, where everyone was gathered, one could taste traditional snacks and treats free of charge, such as sausage and herring, cottage cheese and marshmallows, rye bread, gingerbread, kefir, kvass and even lard!

For the “survivors”, a quiz about Russia was offered at the end of the Day. The winner, Robin Spratt, answered nearly all the 20 questions. We also broke a loaf of bread into many pieces, dipping them in salt and sharing them out, according to an old Russian tradition. We are very pleased with such a great interest in the event, which was attended by about 150 people, according to our estimates. As Eddie Stadnik, the Head of Cambridge Forum of Ethnic Communities has put it, “This is Cambridge for you!” Indeed, Cambridge residents are open to other cultures – our multinational university city always welcomes new knowledge and new experience.

The Russian School is planning to continue this successful undertaking – with more days of Russian cultural heritage, although at a smaller scale and targeted at more specific audiences, such as help centres and particular Cambridge groups and communities.