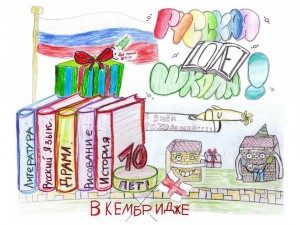 The Cambridge Russian School was opened on 9 May 1999 by a group of Russian-speaking parents, who were dedicated to combining their efforts to not let their children forget Russian and to bring them up as bilingual. From the day it was founded the School has operated on an exclusively charitable and voluntary basis. We ask the parents of all our children to take an active part in the life and work of the School.

Over the years a whole host of wonderful traditions has appeared. Every term is concluded with a production, which is not only much anticipated, but also carefully prepared by the children. At the end of the winter term we have a festive celebration at which Father Frost makes an appearance with presents for all of the children. The spring term is rounded-off with a merry Day-of-Laughter/April Fool’s Production. The children perform humourous scenes, which are followed by fun and games, including an Easter-egg hunt, for all present. At the end of the summer term and academic year we have an open day. On this day parents and guests are invited to watch plays prepared by the students and teachers of the School. Thus the children are given the opportunity to demonstrate their achievements over the past year and as a reward are presented with a certificate and gift. All of the festivities are also always accompanied by a feast for all those present.

We hold literature competitions, mini music concerts, themed talks on the history of art and football tournaments. We also congratulate all the children and teachers on their birthdays in the traditional way (with a “karavai”) and organise competitions for the best birthday cards, as well as much much more.

All of this is made possible thanks not only to the children and teachers, but also a large number of parents, who benevolently give their time, talents and enthusiasm to our School.